Contents
Ferguson's Needs
The Old Way–Paper, Paper, Paper
The Implementation
The Payback
What the Future Holds

Ferguson Enterprises has been growing since it was founded in 1953. What started as two locations serving smaller, regional plumbing contractors has grown into the nation's largest wholesale distributor of plumbing supplies, with 450 branches, 6 distribution centers (DCs) and annual sales close to $3 billion.

"Our growth has been steady over the years and we expect it continue," Al Byrd, Ferguson's distribution director, says. "In order to do that successfully, we needed a solution that would allow us to not only maintain our current level of customer service, but surpass it."

"With 410,000 square feet and $12 million to $15 million monthly in throughput, we didn't feel we could operate this place manually."
-Al Byrd, Ferguson Enterprises distribution director

In order to continue serving its branch customers with ease and accuracy, Ferguson recently implemented an integrated warehouse and transportation-management program at the company's 410,000-square-foot Front Royal, VA, distribution center. Using Provia Software's VIAWARE as the corporate standard, this site was the second to go live. Several other Ferguson sites are slated to go live in the next year.
Back to top

Ferguson's Needs
Ferguson needed help managing use of its warehouse space, the large number of stock-keeping units (SKUs) and the growing daily order volumes. By selecting Provia Software's VIAWARE WMS (warehouse-management system) software integrated with Pinnacle Distribution's FreightLogic TMS software as part of the VIAWARE TMS package, Ferguson is getting a handle on its warehouse and distribution activities.

Ferguson was looking for visibility to its product from the moment orders are received until they're delivered.

"With 410,000 square feet and $12 million to $15 million monthly in throughput, we didn't feel we could operate this place manually," Byrd says. "We had to accommodate random storage needs, utilize the space as efficiently as possible and accurately track our inventory. For complex orders, we have multiple products being picked, with multiple delivery sites. We were looking for a complete, yet easy to use, solution that would allow us to move forward without jeopardizing our customer relationships."
Back to top

The Old Way–Paper, Paper, Paper
As the number of products Ferguson distributed grew, ability to track and make improvements in Ferguson's paper environment could no longer keep up.

"We were also looking to improve our productivity and efficiency," says Ferguson Project Manager Jim Blazek. "We felt the gain in productivity would help pay for the system."

While a paper-based system was sufficient for some of Ferguson's smaller DCs in the past, the size of the Front Royal distribution center and number of SKUs handled there made using a real-time WMS crucial to everyday operations. Using a paper system in such a large facility would create a logistical and administrative nightmare. Ferguson's excellent level of customer service would surely suffer if the company continued to use a paper-based system.

"The employees are impressed with the new system and the process of installing and training for it."
-Al Byrd, Ferguson Enterprises distribution director

Maximizing picking with the old system was difficult, because pick sheets were distributed in a batch mode, and not by location within the distribution center. Simply getting orders to the point where they were ready to be picked could take up to 3 hours of administration time. Because Provia's WMS operates in real time, picks are broken out automatically into specific warehouse zones, allowing for an extremely efficient and streamlined picking procedure.

"Staying with the old system would have severely limited what we wanted to do and how we wanted to support the continued growth of our distribution centers," Byrd says. "The Provia WMS has given us the freedom to continue our growth. It provides the accuracy and other services our customers have come to expect."
Back to top

The Implementation
Ferguson worked with the Provia team to align the company's inbound/outbound procedures with the WMS.

Ferguson first examined its various services in order to discover which ones customers required and which ones could be improved, added to or deleted. This guaranteed that when the new WMS was implemented, services that customers had come to expect were supported. But more importantly, the new processes were quicker and more accurate.

Ferguson used the train-the-trainer approach for implementation. In the Ferguson model, staff from the first site worked to train and prepare staff at the second DC. Subsequent implementations will use this same methodology. It gives the employees a sense of ownership in the process.

"The employees are impressed with the new system and the process of installing and training for it," Byrd says.
Back to top

The Payback
For Ferguson, a company that has long prided itself on exceptionally quick and accurate order-fulfillment for its branch customers, the automatic-replenishment functionality of the Provia WMS has been a key element in success. Stock is never fully depleted from the forward-picking locations because the system notifies workers that product is running low and must be replenished. 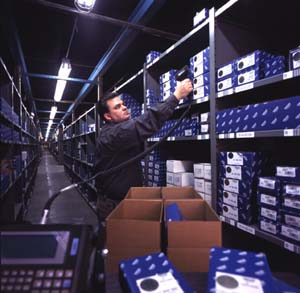 A worker in the Ferguson Enterprises 410,000-square-foot Front Royal, Virginia, distribution center, uses a radio-frequency scanner to fill a cluster-pick order. Ferguson is paperless, thanks to Provia's VIAWARE warehouse-management system package, which allows the DC, one of six in the wholesale plumbing-supply distributor's network, to efficiently move between $12 million and $15 million a month in product. VIAWARE boosted shipping accuracy from 93 percent to 99 percent. Photo courtesy Provia Software

As in many DCs, some products move faster than others. Ferguson uses the random-storage functionality of Provia WMS for increased storage flexibility and maximum space utilization that comes from being able to dynamically change storage locations. Faster-moving items are placed in fixed-storage, forward-pick locations that are easier for employees to access. Slower-moving items can be stored anywhere in the DC and retrieved easily. The system creates monthly reports to help determine whether forward-pick locations should be modified, allowing for constant process improvement.

The reporting capabilities of the system are also a plus for Ferguson.

"We can definitely see a lot of opportunities with the system, especially with the productivity reports we get back," says Byrd. "Being able to track inventory from receiving all the way to the dock has been a big plus. We now can easily monitor, adapt and change based on how our business changes."

Front Royal workers use LXE radio-frequency (RF) terminals for label-directed cluster picking. Once an order is picked and packed, the system randomly audits orders before they are put on the truck. These random audits act as an internal checkpoint and have improved Ferguson's shipping accuracy up to 99 percent. Prior to the VIAWARE implementation, the DC could achieve only 93 percent shipping accuracy.

Meeting customers' special packing requests is also something that earns special notice. With the size of Ferguson's distribution center and the number of products that could be in a single order, granting a special packing request, and meeting a deadline, was difficult. The Provia WMS allows this to happen with no hassle. Customers can now request something as specific as which products need to be delivered to which area of a construction site.

"Customers can specify that one part of an order go to the second floor of a site, and another part of the order go the third floor," Blazek says. "This gives them an extra level of service we could not offer before."
Back to top

What the Future Holds
Ferguson still performs a physical inventory at Front Royal twice a year, when the DC shuts down for several days while all inventory is counted. The robust cycle-counting functionality of Provia's WMS helps increase the efficiency of this procedure. The cycle-counting variance with Provia's WMS is less than one-half percent of current inventory variances. This will allow Ferguson to scale back, and eventually eliminate, the need for Front Royal to perform physical inventory within a year of June 2000. Complete physical inventories have already been eliminated at Elkin, NC, the first site to go live.

"Customers can specify that one part of an order go to the second floor of a site, and another part of the order go the third floor. This gives them an extra level of service we could not offer before."
-Jim Blazek, Ferguson Enterprises project manager

For Provia Software, the commitment from Ferguson early on is making this project a success.

"Implementing VIAWARE at this site was a collaborative effort," Tim Schultze, Provia Software project manager, says. "Ferguson's dedicated staff was committed to this project early on, which makes all the difference."

In looking at why Ferguson selected Provia for supply-chain execution needs, the ability to deliver to the customer was the driving force.

"Servicing our customers in a timely, efficient and accurate way is what we're here for," Byrd says. "Investing in this software helps us do that better. We have the power to deliver to our customers. Our customers aren't necessarily aware of the new technology, but they are aware of the fact that we are continually there to serve them."