Contents
Providing the right stuff
Ramping up
Some extras

Athletic-footwear and sports-apparel giant Nike Inc. has gained a worldwide reputation for quality and performance.

The Beaverton, Oregon-based, company has enhanced that reputation, at least in part, by aligning itself with world-class athletes: men and women who push themselves to their limits.

Nike Tennessee Inc. has decided to do the same with its throughput, pushing it to the limit at its seven-building, 1.25-million square-foot distribution center (DC) in Memphis.

"We measure by unit volume," Mark Dennington, director of operations at the DC that opened in May 199, said. "Through two 8-hour production shifts, we were averaging 350,000 to 400,000 units shipped per day, with a peak of about 550,000. Still, we weren't satisfied. We wanted to do more. We've experienced huge growth over the past few years, specifically in our outbound shipping volumes. Consequently, we needed an internal system to help us increase our throughput capacity to one million garments in a 24-hour window."

Productivity at the big Nike DC in Memphis has sprinted upward 60 percent, and order accuracy is a high-vaulting 99.8 percent.

Essentially, Nike Tennessee was looking to almost double its throughput. Athletically, that would be the equivalent of a runner halving his or her time in the mile. Yet, Nike was able to Just Do It with a major boost from Mathews Conveyor of Danville, Kentucky. Mathews Conveyor, a member company of FKI Logistex, designs and manufactures complete material-handling systems that integrate conveyors, sorters, controls and custom options. Mathews serves North America from two full-service manufacturing facilities in Danville, Kentucky, and Mansfield, Ohio. FKI Logistex was formed in 1999 as a complete single-source material-handling provider to address the evolving needs of e-commerce driven businesses. FKI Logistex is part of the Material Handling Group of FKI plc, headquartered in Halifax, United Kingdom. 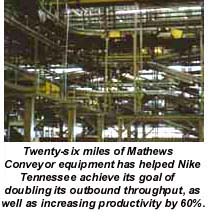 This is the kind of system befitting an industry leader like Nike. In 1991, Nike became the world's first sports company to surpass $3 billion in total revenues. And the growth in revenues has been dramatic: by fiscal year 1998, the company boasted revenues approaching $9 billion. Nike is also Oregon's largest publicly held company, according to Oregon Business Magazine's 1999 Power Book.

Nike's Tennessee facility serves as a customer-service center, handling apparel and equipment distribution. The facility comprises seven buildings, one of which is dedicated to receiving and customer/consumer returns; half the building is used for pallet storage. Two other buildings are used for pallet storage, one building for carton storage, one for packing and value-added services, one for active picking (unit pick) and shipping support, and one for shipping and some carton storage.

"We had 13 miles of Mathews conveyor before the new project. We doubled that to 26 miles."
-Mark Dennington, DC operations director

The Mathews equipment was no newcomer to Nike. Indeed, Nike had been using Mathews product since the facility opened in 1991.

"We had 13 miles of Mathews conveyor before the new project," Dennington said. "We doubled that to 26 miles."

The company also added other material-handling equipment, including two large sorters from Crisplant Inc. of Fredrick, Maryland (also an FKI Logistex company). The Crisplant sorters interface with the Mathews accumulation conveyor in the staging phase of the order process. The Crisplant tilt tray system, which is in Nike's processing area, is the heart of the operation and the interface.
Back to top

Ramping up
Dennington said the company sought at least one competitive bid from another conveyor supplier, but that Nike's experience with Mathews cast doubt that another material-handling supplier would be chosen.

"We went to a consulting firm [Kurt Salmon Associates] to oversee the entire project," Dennington said. "We sat down with Mathews Conveyor and told them our expectations and goals. We asked them very candidly whether they could meet those expectations. It was very unlikely that we would try to integrate equipment from a new material-handling equipment provider, considering our original equipment was from Mathews Conveyor and we were happy with it. Plus, we've had a long relationship with them, one that we value highly."

The upgrade process was able to proceed while Nike continued its business unabated.

"We didn't shut down. We were continually shipping product," Dennington said. "The new building helped us establish functional areas to support the business, which allowed us to come back into the existing buildings and retrofit them. We limped along on our ‘legacy system' while we created new systems such as the receiving system and new bulk storage. This allowed us to go into the older buildings, empty them, and have a vacant building for the construction."

Training requirements were minimal, because Nike had used Mathews Conveyor before.

But that was just part of the logistical challenges. The fact that a number of vendors had to coordinate their efforts – sometimes working around the clock on very demanding schedules – was particularly challenging. Yet, Mathews Conveyor was up to the task.

"We thought Mathews Conveyor was very creative in how they were able to work around other vendors," Dennington said. "We had multiple vendors working at the same time. We had Crisplant building tilt tray sorters, and Mathews couldn't wait until the sorters were complete. Mathews needed to attach conveyor to the tilt tray sorter at the same time that the tilt tray sorter was being installed. We also had weekly meetings where we brought all of the vendors together, which was helpful in managing the project's massive scope and fostering collaboration between the different vendors."
Back to top

Some extras
Training requirements were minimal, because Nike had used Mathews Conveyor before. There was more training for employees who were going to use the automated system. Nike uses a software system from Mathews Conveyor called the Answer System, which is a colored-graphics monitoring system. 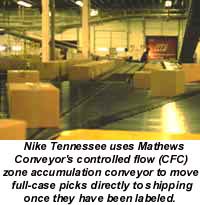 Training is provided for people who will be monitoring the performance of the conveyor system itself.

Answer System is a critical part of the material-handling system, because it provides carton tracking, graphical representation of the system and divert confirmation.

"Our installation is much more dynamic now," Dennington said. "We don't have to do as much preplanning in regard to where things will go with the newer equipment, due to the combination of the software system and the control systems in both the Crisplant and Mathews Conveyor equipment."

In the new receiving system, for example, there is a sizer. When a carton passes through the sizer, it dynamically determines the cube of this carton – that is, how many cartons can fit on a pallet to fit into the storage position. Thus, Nike can maximize space usage in the building by taking advantage of some of the material handling system's unique features.

The sliding shoe sorter has a capacity of up to 540 feet per minute and can sort as many as 230 cartons per minute, based on an average box length of 18 inches.

The other elements provided by Mathews Conveyor offered equally impressive performance. The company's controlled flow (CFC) zone accumulation conveyor moves the full-case picks directly to shipping once they have been through a labeling station. This live roller conveyor permits accumulation in one direction of items without build-up of line pressure, which causes product damage or jams. Single-item release, which allows the exit of one load at a time following an electrical remote signal, is a standard CFC feature, as is multiple-load release, which allows product to exit progressively after a maintained electrical signal is received. The direction of these conveyors may also be reversed so that they can be used as transport conveyors.

Mathews' sliding shoe sorter, among the fastest and longest sorters available, sorts full-case picks from the pallet flow racks and single-carton areas once they have been labeled for shipping. The sliding shoe sorter features a strong, lightweight design that minimizes switch impact and accelerative loads. Its replaceable polyurethane bumper bands cushion impact and prevent slipback, while the leading-edge plow design eliminates damaging jams in discharge spurs. The sorter has a capacity of up to 540 feet per minute and can sort as many as 230 cartons per minute, based on an average box length of 18 inches.

Individually, each piece of Mathews equipment has performed extremely well and has been instrumental in helping Nike Tennessee improve overall quality and productivity. Working together, the various elements constitute a manufacturing resource that helps put Nike in a league of its own.